(Geelong, Vic, Australia)- A fleet of more than 270 boats will compete in the 2019 Festival of Sails, Australia’s biggest celebration of sailing, which kicks off with the 176th Passage Race from Melbourne to Geelong on Australia Day.  The regatta runs from January 26th to 28th and is hosted by the Royal Geelong Yacht Club.

Meanwhile, sailing in the offshore, random-leg, handicap racing divisions will be a number of other J/Crews. In the AMS Cruising Division is the new J/121 JAVELIN. She was newly commissioned this year and is based in Mornington.  The crew has steadily optimized their performance and is proud to be the recent winners of the ORCV 2018 Winter Series.  Skipper/ owner Mark Nicholson and crew will have their hands full taking on many of Australia’s best offshore teams. 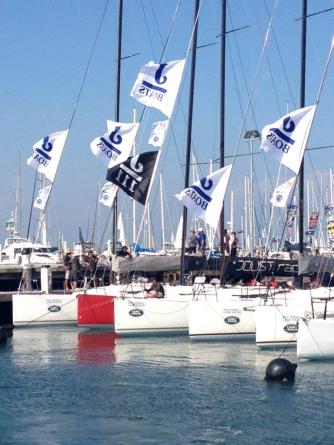 Festival of Sails Chairman Stuart Dickson said, “It’s fantastic to see so many keelboat entries with participants coming from nearly every part of Australia and international competitors heading to Geelong in the coming days from Malaysia and the United States. We expect about 3,000 participants will take part in the event and we are already seeing boats arriving at the Royal Geelong Yacht Club in preparation for the Festival of Sails. We are looking forward to welcoming more competitors over coming days, ahead of what is looking like three spectacular days of sailing on the beautiful flat waters of Corio Bay.”

Tens of thousands of people are expected to flock to the Geelong waterfront over the Australia Day long weekend. Complementing the sailing is the Waterfront Festival, presented by Geelong Connected Communities, which will provide visitors with a smorgasbord of activities, live music and the Regional Artisan Fair, showcasing local produce.

The Royal Australian Airforce’s elite formation aerobatic display team, the “Roulettes”, will also make a stunning return to Geelong. They will perform a breathtaking 15 minute aerial display in their PC-9/A aircraft, over the Royal Geelong Yacht Club and Eastern Beach Reserve, from 1pm on January 26.

The Royal Australian Navy Band, one of Australia’s most widely recognized military bands, will also entertain crowds on Australia Day, with two sets starting at 12:30pm, from the Eastern Beach Reserve stage.

A fireworks display, proudly sponsored by AirAsia, will be held at 9.15pm on Australia Day. The best vantage points will be from Eastern Beach Reserve and Ritchie Boulevard.