Under clear blue skies, with a westerly breeze, ranging from 12-20 Knots, three races were held on the beautiful Costa Smeralda. The J/70 Armada left the safe confines of the Yacht Club Costa Smeralda apprehensive of what was to come. The sight of 162 teams gathered on the race course was nothing short of spectacular, a gigantic festival of yacht racing. The fleet would not return for over eight hours of intense competition, salt-encrusted and elated by the experience.

J Boats Stuart Johnstone, racing with Henry Brauer on American entry Rascal, spoke about the first day of racing at the Audi J/70 World Championship. “It was an extraordinary feeling leaving the harbour this morning, I was thinking back to the golden days of the J/24. I was filled with family pride, seeing so many sailors going out there to enjoy a spectacular day of sailing.”

“Out on the race course, we could recognise the depth and talent of the fleet,” continued Stuart, “If you fell out of the top tier, it was very difficult to claw your way back before the top mark. Downwind the classic post-mistral conditions meant there were big lulls as well as big puffs, which is very challenging. Packs of boats kept passing each other with sometimes 50% difference in boat speed.” 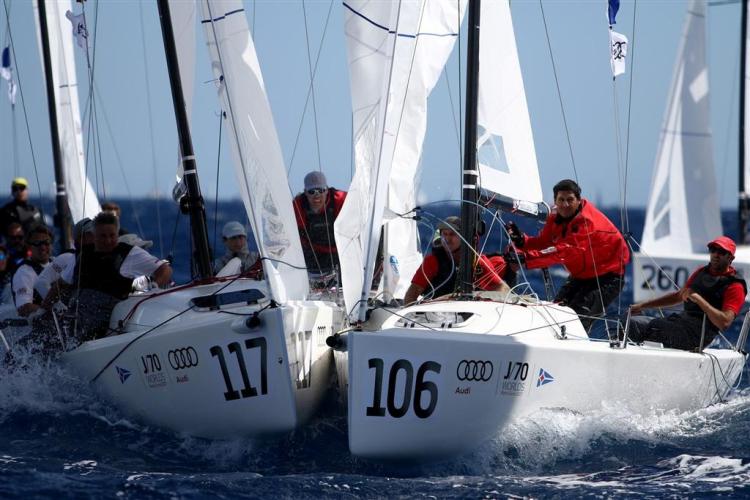 The Audi J/70 World Championship will continue tomorrow, September 15, the intended first warning signal at 1100 CEST. The 162 boat fleet will be split into Gold and Silver Fleets.

Keep up with daily news, photos, videos, official documents and provisional results from the regattas on our website and via social media using #j70worlds #yccs50 #myj70worlds.